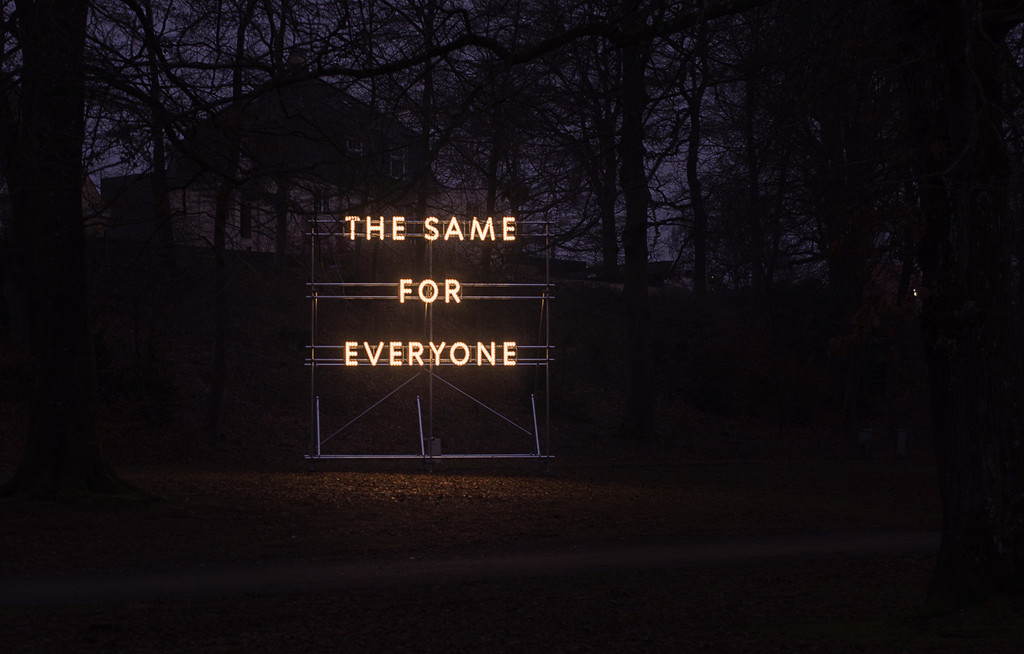 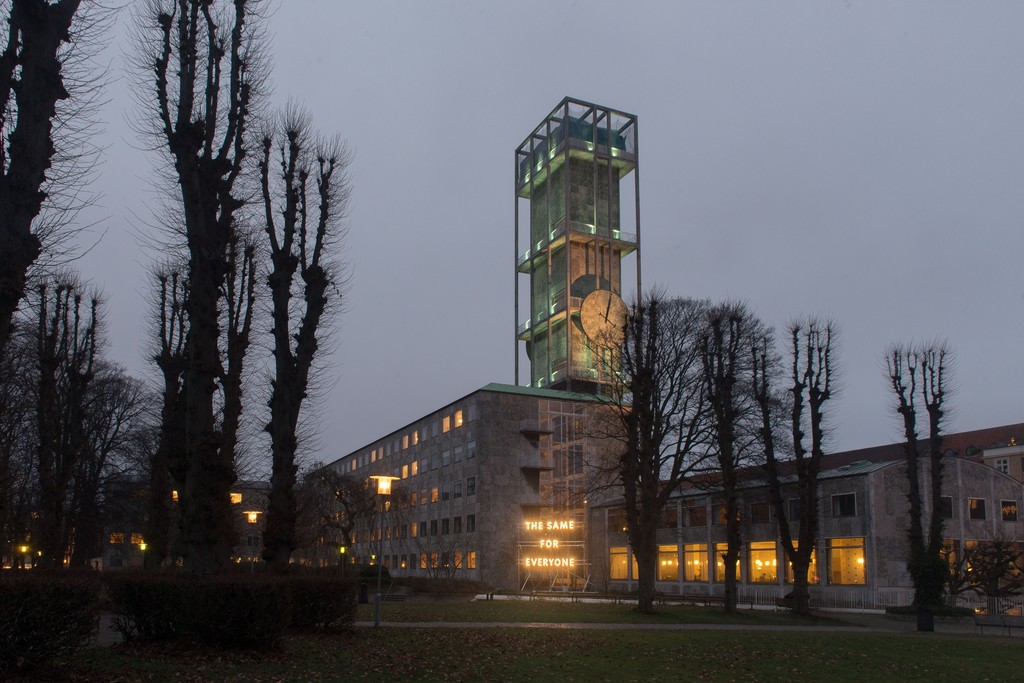 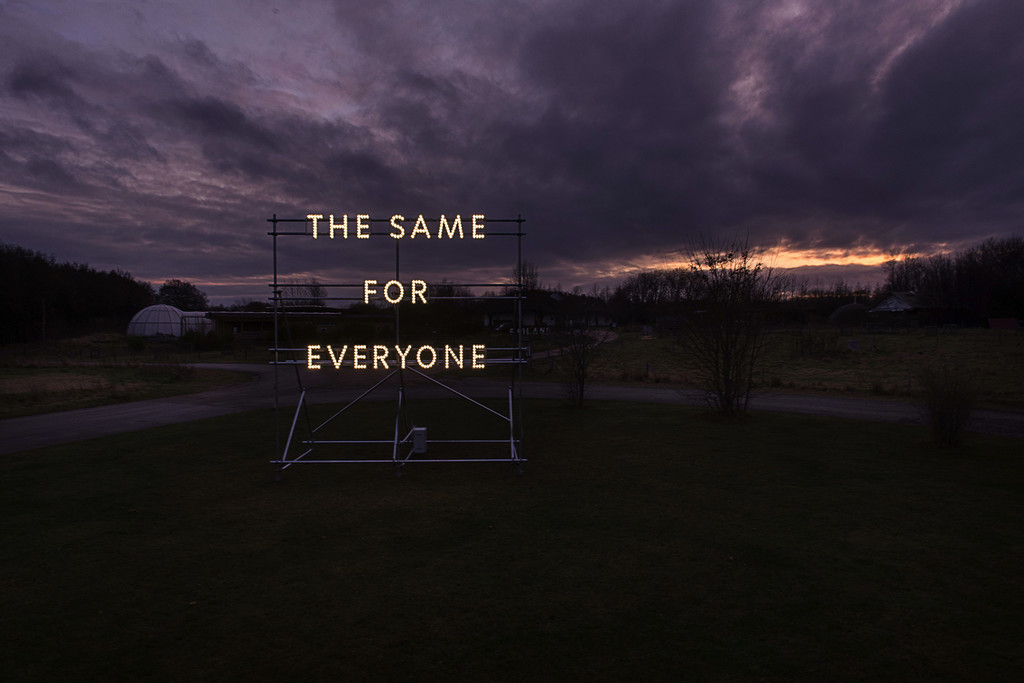 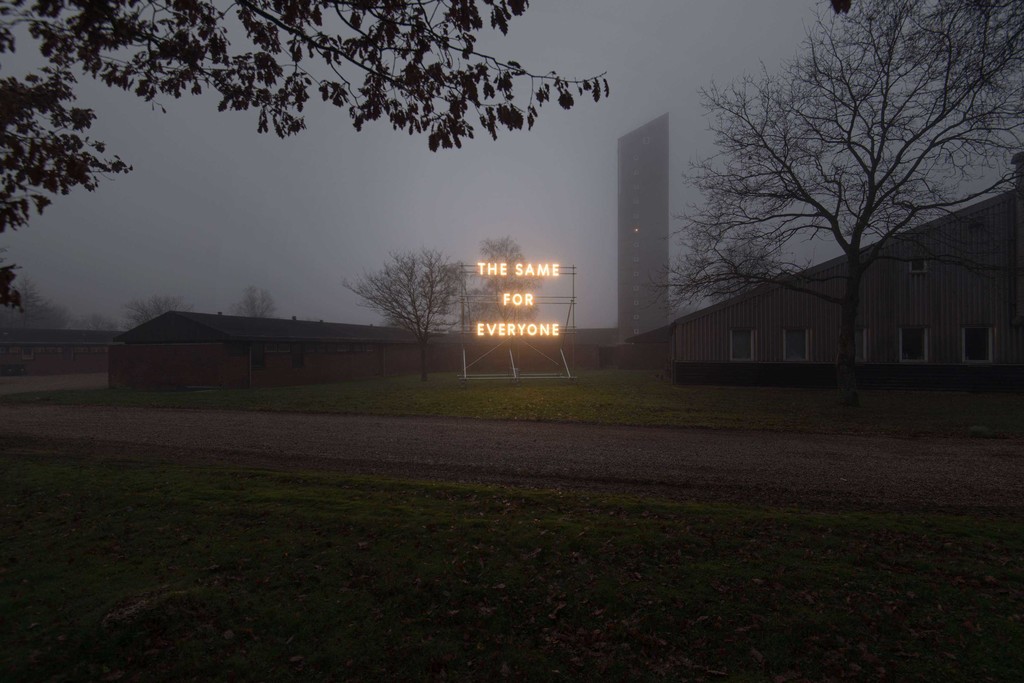 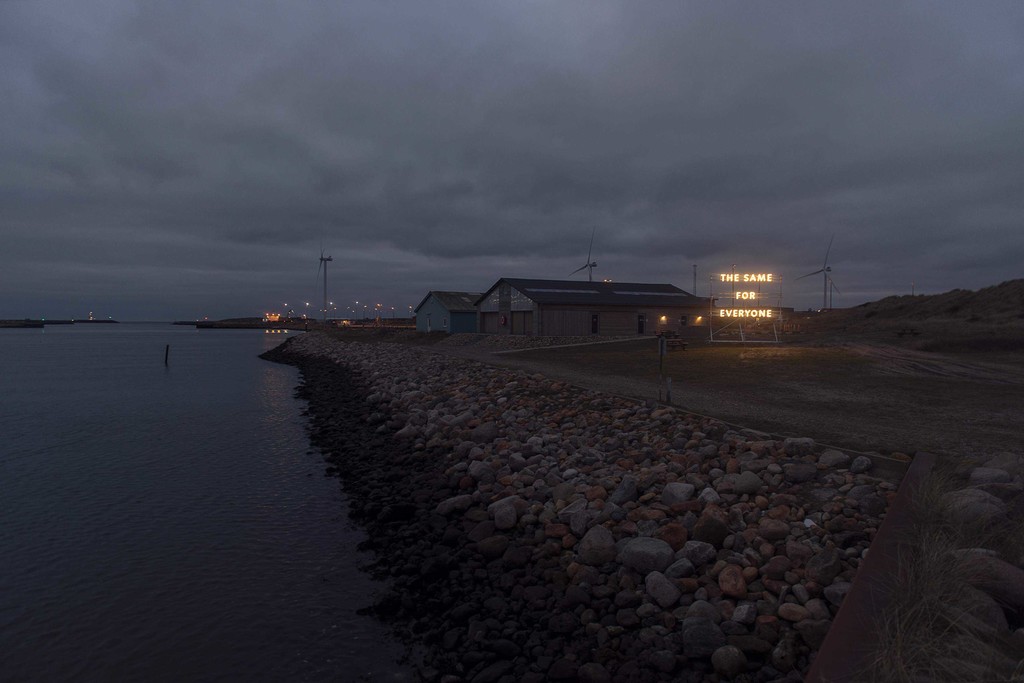 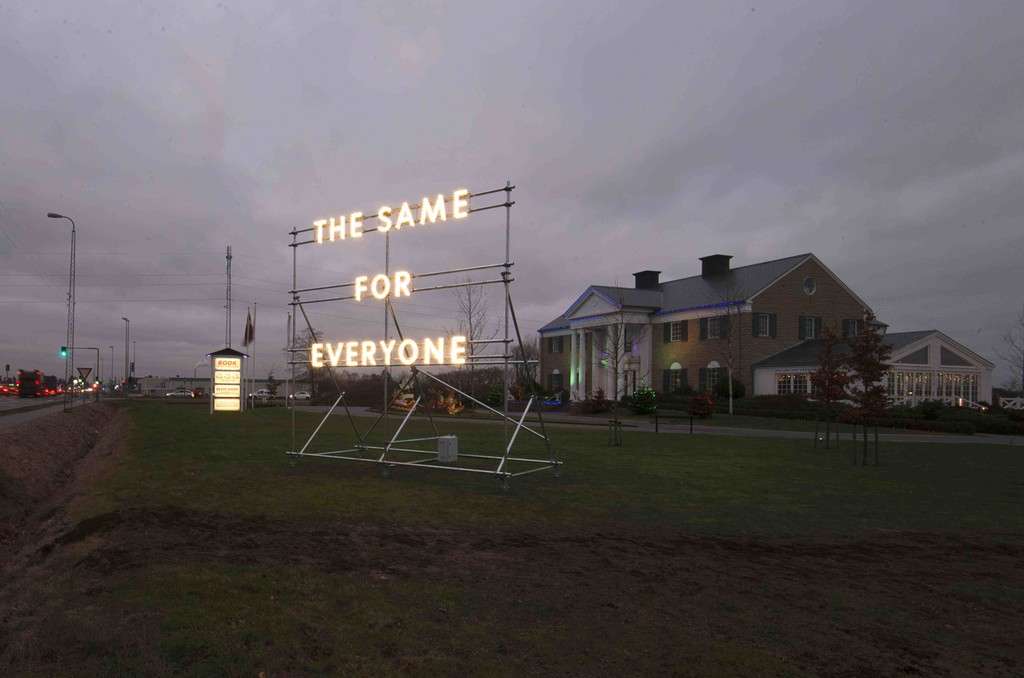 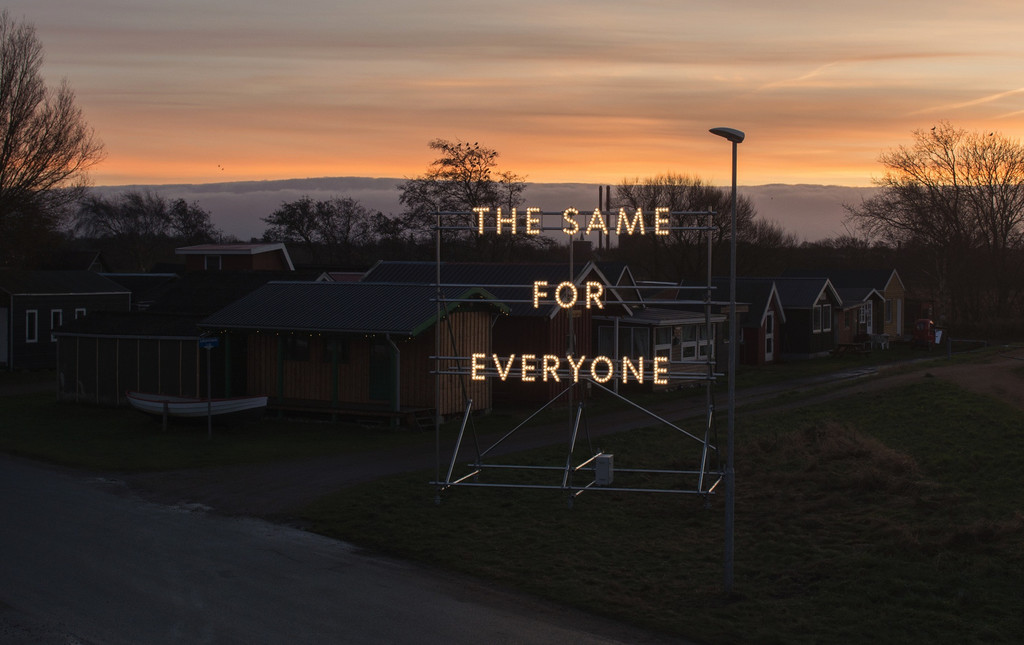 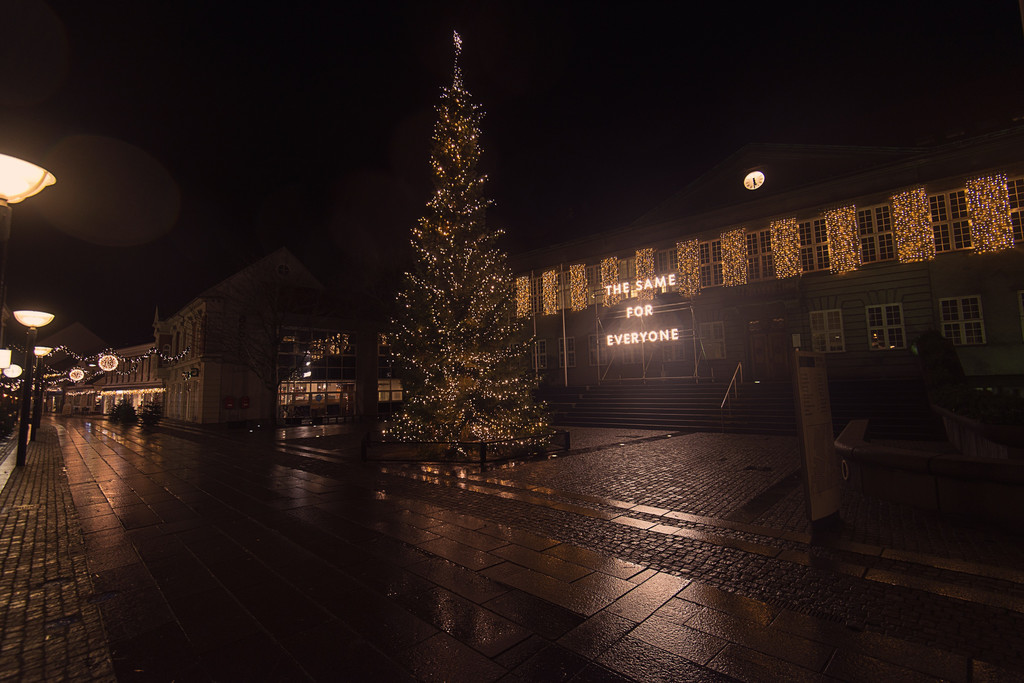 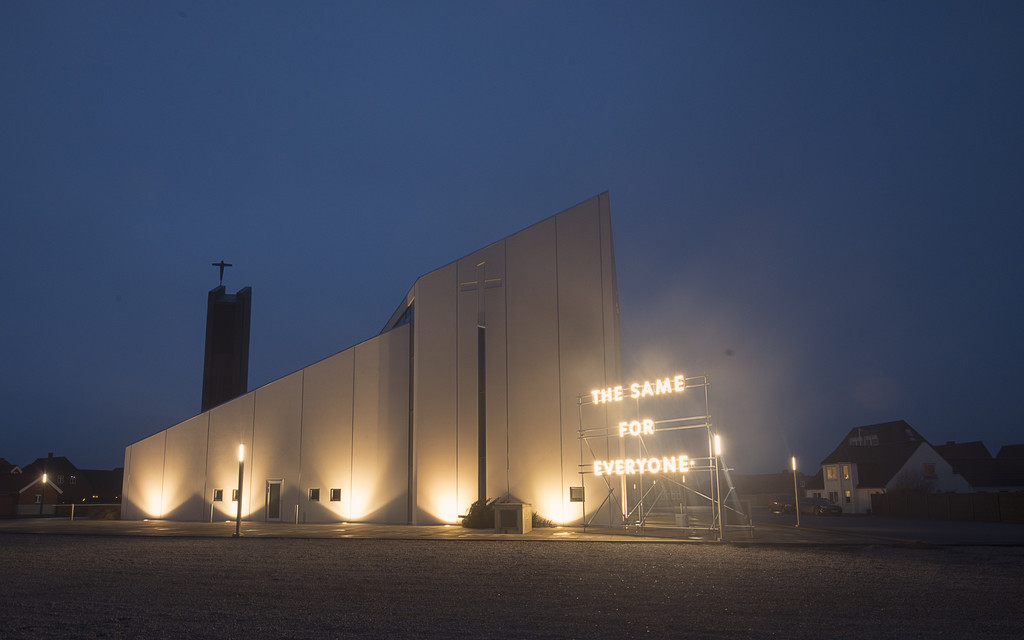 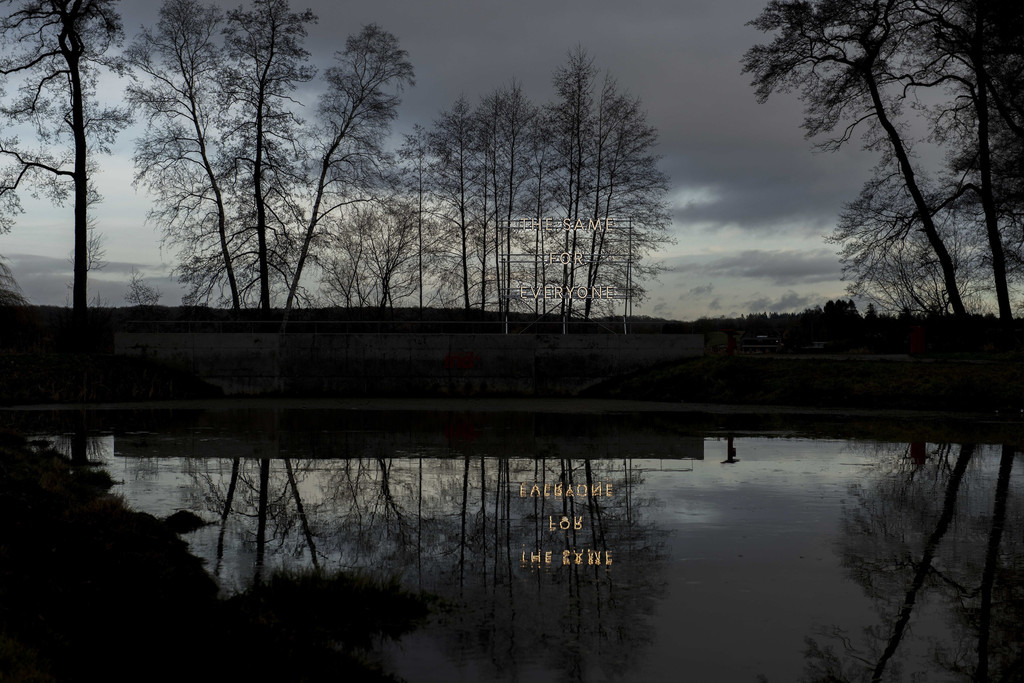 Commissioned as part of the Aarhus2017, European Capital of Culture

THE SAME FOR EVERYONE

For over twenty years, Nathan Coley has produced a rich body of work that prompts us to interrogate our surroundings and the structures that exert control within them. Through the use of the readymade - whether it is a phrase, an image, a tombstone - Coley conjures meaning that is often both…

For over twenty years, Nathan Coley has produced a rich body of work that prompts us to interrogate our surroundings and the structures that exert control within them. Through the use of the readymade - whether it is a phrase, an image, a tombstone - Coley conjures meaning that is often both immediate and intangible. Though working in a wide range of mediums, he is best known for his illuminated text works: capital lettered proclamations in white bulbs supported on large scaffolding constructions. The precision and simplicity of the sans serif text is juxtaposed with the distinctly temporary aesthetic of the structure. It recalls the signage of the fairground or the travelling circus - here today, gone tomorrow. The ‘voice’ behind the text is authoritative, accusatory, inspirational, demanding; yet anonymous.

THE SAME FOR EVERYONE is the most ambitious work in this series. Commissioned for the European Capital of Culture Aarhus 2017 and placed in 10 separate locations around central Denmark, the individual light pieces have an identical message but the nature of each site differs greatly. They stretch from the east to west coasts of Jutland - from Aarhus Town Hall to Hvide Sande Harbour in Ringkøbing - places of commerce, religion, government, community, even at a recreation of Elvis Presley’s Graceland in the municipality of Randers. Each site gives the piece a different meaning. Coley makes explicit here a theme that has been fundamental to his practice throughout his career; the impact of work to location, and location to work. One provides oxygen for the other. At the same time, collectively the piece retains a single voice within a national and international context. The exact meanings within the work are somewhat harder to pin down.

The phrase is key to Coley’s light sculptures. Its structure is crucial both formally and intellectually and it must come to him in ready-made form. This may be from an overheard conversation, a news report or a chance encounter, and the words must have an inherent resonance for the work to be effective. In this case, while Coley was researching potential locations for the commission, he visited the Friland community, located 35km outside of Aarhus near the east coast town of Ebeltoft. Friland is an eco-village built around principles of zero waste, renewables and no debt. Householders build their own dwellings, so are mortgage free. One particular plot of land caught the artist’s eye. It featured an empty concrete circle, something he saw as an area of architectural proposition, like a plinth awaiting a sculpture. Next to this was a hand painted cardboard sign tied to a utility outlet; ens for alle.

Loosely translated into English, same for all, has all manner of connotations around Danish and wider Scandinavian ideals. Equality is a keystone of Danish society and the country is one of the most egalitarian in the world; with a low rate of income inequality, free education and a welfare state that prioritises employment security over job security in a scheme known as Flexicurity. Denmark was the first country in the world to formally recognise same-sex unions and LGBT equality rights are among the most extensive in the world. In 2016, Denmark was literally the happiest country on the planet.

THE SAME FOR EVERYONE can be seen as a celebration of the ideals and achievements of one of the world’s most socially progressive nations, a pronouncement of utopia. The very fact that Coley’s work is distributed across such a wide part of the country emphasises these principles of equality, democracy and fairness – every location has the same.

Coley’s work engenders an immediate meaning that can slowly dissolve into question, interrogation and doubt. The light pieces are often read simultaneously as celebratory and cynical, with the anonymity of the proclamation only heightening a growing sense of unease. The rough aesthetic of the scaffolding structure emphasises temporality, as if the work could vanish as quickly as it appeared. This is reinforced by the fact that we do not know who is speaking and for what purpose. If I concur with the sentiment, who am I agreeing with? The work offers no clue, only proclaiming:

Is this a statement or a question? An accusation even? Denmark has among the strictest immigration laws in the world, and the toughest in Europe. Under current legislation, it takes eight years of permanent residency to become eligible to apply for Danish citizenship. A study by Aarhus University found that immigration legislation had been amended 68 times between 2002 and 2016 – seemingly placing more and more hurdles in front of potential citizens.

Like many countries in the western world, Denmark has seen a political swing to the right. Calls have been made for immigration legislation to become even more stringent and the atmosphere within the country for certain ethnic groups has become oppressive. Proposals have been mooted to ban prayer rooms in schools and universities, a thinly veiled move against Muslim students. Controversially, this has received support from the centre-left Social Democrat Party, as it seeks to gain ground after the 2015 election loss. The right-wing Danish People’s Party has even argued that Muslims should be encouraged to celebrate Christmas to promote their greater integration into Danish society. THE SAME FOR EVERYONE suddenly takes on emphasis; prescribed and enforced.

In what must be the epitome of contradiction in the Danish system, the controversial Smykkeloven, or Jewellery Law, gave authorities the power to confiscate the personal items of asylum seekers in order to fund their stay in the country. For many, the depersonalisation and disenfranchisement of those already in desperate need had echoes of the darkest period in modern European history.

Another of Coley’s light works, perhaps the doppelgänger of THE SAME FOR EVERYONE, celebrates the GATHERING OF STRANGERS. This piece suggests that the true success of modern civilisation is achieved through embracing all races, cultures and religions. Difference is what makes life interesting, challenging and inspiring. THE SAME FOR EVERYONE can leave us comfortable and dulled.

Ultimately, the reading of Nathan Coley’s work differs from viewer to viewer, which only adds to the fascinating dichotomy between boldness of statement and intangibility of meaning. The questions and doubts are ours; the artist does not directly interrogate us. Interpreting Coley’s work says more about the viewer; it is a mirror reflecting our own associations and biases back at us.

As an outsider to Denmark, I have taken primarily a national and international view of the work, but this belies the intricate regional differences between the chosen sites and the delicate interplay between them. As I write from a United Kingdom that is undergoing the most significant and troubling period of political change in a lifetime, viewing this work as an aspirational proclamation of Danish and European values has a melancholic tinge when seen through our own narrowing, nationalistic lens.

Indeed, within a wider international context, political convulsions around the world give the piece a wholly different resonance, particularly alongside the rhetoric of populist movements. THE SAME FOR EVERYONE recalls the opportunistic emptiness of campaign slogans such as ‘Make America Great Again’ and the rise of a politics in which the very richest claim to represent the working class. There is an absurd irony to this work existing in a world where 1% of the population has more wealth than the rest of the globe combined. In this context, Denmark, where 90% of the populace have approximately the same standard of living, is a beacon of equality, and notions of an egalitarian utopia spring to mind once again. And we have come full circle…

These nuances and paradoxes are ultimately what make Coley’s work so rich; there are strata of meaning that continually shift and rise to the surface. Then, just when you feel you see something clearly, it vanishes.

1. Interview with the artist, https://www.idoart.dk/blog/the-same-for-everyone

6. Deborah Hardoon, et al, An Economy For the 1%: How privilege and power in the economy drive extreme inequality and how this can be stopped, Oxfam International, 2016, p. 1